You can always find Still Growing on iTunes or on my favorite apps: Stitcher Radio & Swell. 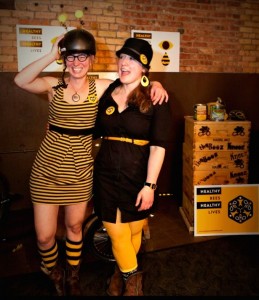 In this week’s episode of Still Growing (SG525), Kristy Allen and Erin Rupp of The Beez Kneez give us an in-depth look at how their innovative company is not only selling and delivering honey, but also educating and advocating for the core of their business: bees.

These gals don’t need to hire a marketing firm for their start-up – they’re creating a buzz all their own with their fresh and earnest approach to business – from wearing bee costumes and riding their custom painted bee bikes to deliver their honey through the streets of Minneapolis to strategically partnering with all kinds of organizations in their community.

Kristy and Erin, the millennial entrepreneurs behind the Beez Kneez, share their simple and powerful passion for bees on their website:

“We are the Beez Kneez. We love bees, we love honey, we love bicycles and we’re on a mission.

Honeybees pollinate ⅓ of the food we eat. Beekeepers lose 30-40% of their hives annually. Raising public awareness of, and connection to, honey bees is essential to a healthy food system.

It was a pleasure to chat with Kristy and Erin. You’ll find plenty of information, inspiration, and specific steps you can take to help one of our most important pollinators – bees – in today’s show!

“So the honey sales business began with a question from Bar Bell Bee Ranch – from my aunt and uncle. I was up there extracting honey. They have over 1,000 hives.

My aunt asked if I would like to sell their honey in Minneapolis.

I had a bike that needed to be painted because it had been through a couple winters. So, I decided that I would paint my bike to look like a bee and deliver honey to people’s doors like the milkman delivers milk.

I didn’t really know where it would go.

On Halloween, I decided to dress up like a bee to match my bike and it just kind of – no pun intended – stuck.

The Beez Kneez became a honey delivery business where I would source honey from my aunt and uncle and then deliver it. 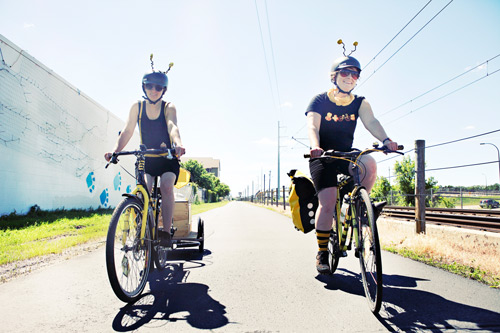 “The Buckwheat Honey is popular.

I use it in coffee. It’s a really earthy honey and it pairs really well with things.

It’s really interesting because a lot of beekeepers from different parts of the state don’t have the market for it.  But, you bring it to Minneapolis and St. Paul … it’s a hit. My supply ever year runs out.” 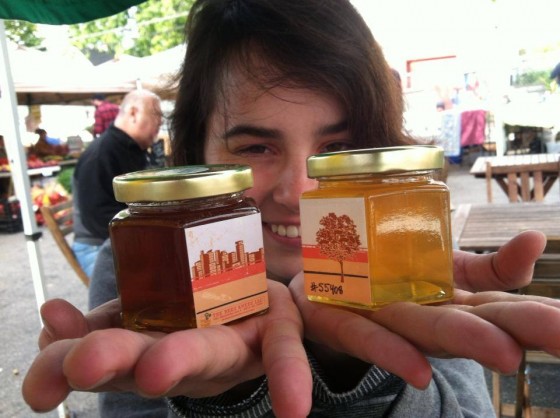 “The Wildflower Honey is something that comes back in the fall.

The Honeyapolis Wildflower, the city honey, is harvested in the city.

We only have two hives at each site. Every single honey is sourced by zip code and every sourced honey is different. Hives only produce so much and then once we sell out it’s gone. Then, the next year we’ll have that zip code back.

What’s really exciting about that honey is that we don’t know year to year if its going to be the
same or different because people are planting such a variety of things here in the city.

In the country, if you know what’s around you – your landscapes, basswood trees, etc. The bees collect nectar and they turn that nectar into honey. And, whatever flower they are collecting from will determine the taste of the honey.

So the buckwheat is from fields and fields of buckwheat – 1,200 acres to be exact.

We as beekeepers know, that if we put bees on those buckwheat fields when they’re blooming, the honey is going to be primarily buckwheat.

The bees go a three mile radius from their hive.” 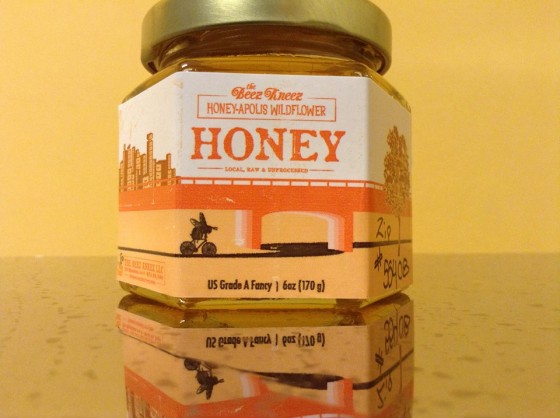 “Honey bees make honey for themselves so they have something to eat in the winter.

They’re kind of crazy insects in the way they overwinter.

They’re not flying south like Monarchs do. They don’t lay eggs in the fall in the ground.

Honeybees maintain the same temperature throughout the Winter. They shiver together around the queen, move like penguins so nobody is on the outside of that cluster for too long, eat honey, and survive – even when it’s -30 for many days – like in Minnesota in the Winter. So, they need about 100 pounds of honey to eat through the winter. Any honey that they make over that, you can harvest.” 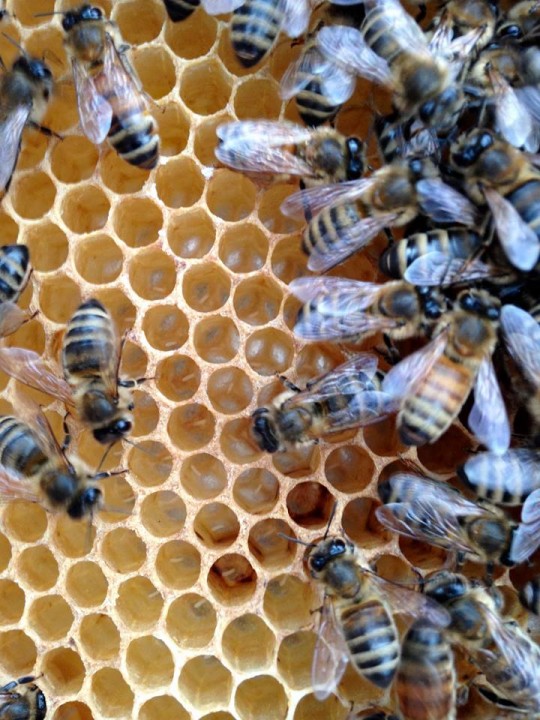 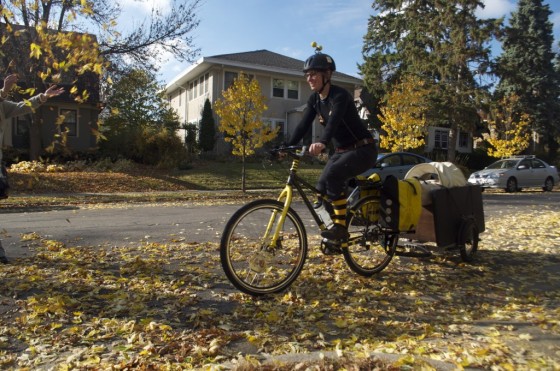 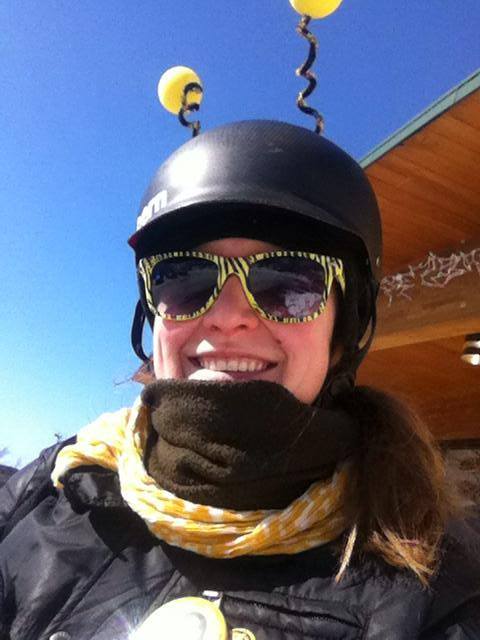 “And, we thought that honey bees were really well-matched for monocultures.

They live in this box provided by beekeepers and bees will choose that box. Beekeepers can move that box easily around the country to the bloom and that’s what commercial beekeepers are doing – and need to be doing – for the way that we farm.

So, if you have a big monoculture of just almonds, it’s the same as a big monoculture of just lilacs. Lilacs bloom in early Spring and almonds have a bloom time in February. Acres and acres of almonds – they all go to bloom at the same time. It’s a feast if you’re a pollinator during those two or three weeks… and then there’s no food at all. They can’t survive because there’s nothing to feed on for the other eleven months. 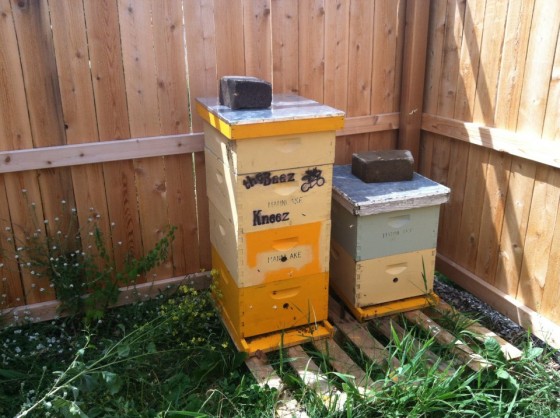 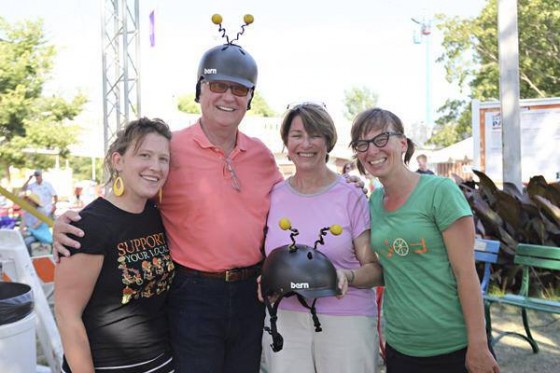 So, each individual bee, as she goes out on her foraging, will choose the same kind of flower on that one trip – if she can.

So the way that they’ve evolved seems well matched to this monoculture system.

But, as we’ve learned much of what is going wrong with bees is tied to the way we grow food.

There’s not much forage for bees, the pesticides we use, etc.

Honey bees are insects that we manage and know really well. We know when something is wrong with them.“ 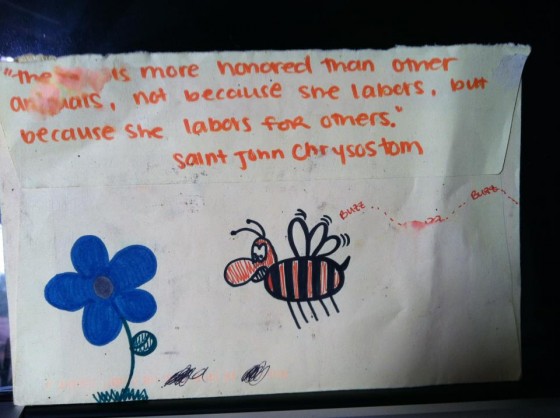 “There are some concrete individual actions that people can take that will help the bees.

Eliminating your pesticide use – that’s great. That really will positively impact bees, other pollinators and other insects. 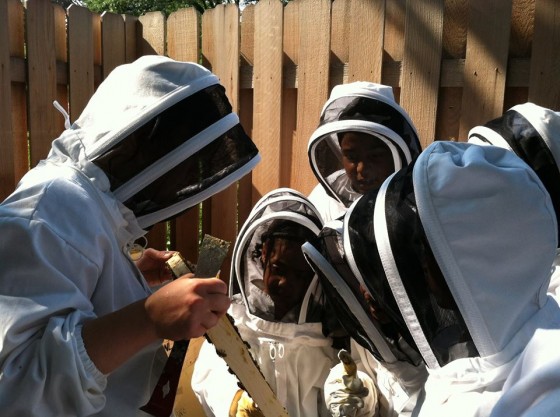 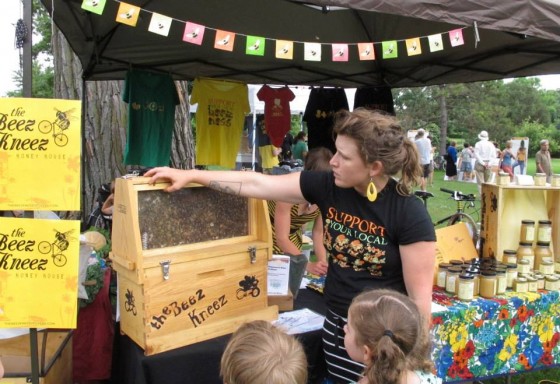 “The beekeepers are losing 30 to 50 percent of their hives annually and that number just keeps going up. Those threats are real.

If bees go away, how will we source strawberries? Or, any other vegetable. All these nutritious things that we need in our diet – that are already not cost-effective for folks – are going to be less accessible.

Can you imagine if everybody lost coffee?

How angry everybody would be? Apocolypse.

Everyone would be going around edgy and irritated. We know that’s bee-pollinated. Coffee – something most of us have every morning… and all day long.

It’s one of my favorite things to talk about – coffee.  It’s this really this thing that we don’t think about. How it gets here – it doesn’t grow here – and it is bee-pollinated and it keeps people sorta sane in an interesting way.”

“If I were to give advice to new business owners, I would say ask for help.”

Mentioned on the Show: